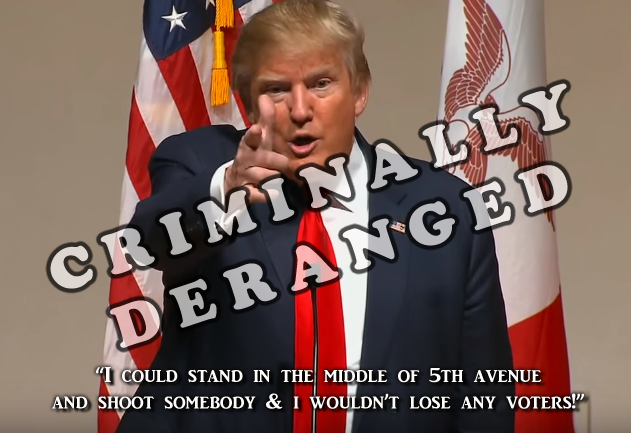 @ Home (11:23pm PDT) — What a crazy week it has been. So much as happened that it’s really hard to keep up with twists and turns in The_Donald vs. Clinton battle of words, insults and conspiracies (specific to the former). What is more alarming is that the accusations have become even more vitriolic in that HRC had to counter The_Donald’s accusation of her being a “bigot,” to her illustrating those on the “alt-Right,” white supremacists, racists and of course garden variety ‘bigots’ (in this context), who support him. Specifically where his campaign CEO Stephen K. Bannon; is concerned. To this point, this correspondent cannot wait till the debates start to somewhat clearer picture as to who the real nut-job is.

Speaking of wackos, in general, The_Donald’s gastro-doctor was back in the news this week. And this time was interviewed by NBC news (as opposed to an expletive laden phone interview?). It is presumed that enough has been said in this regard and that the consensus is that The_Donald’s letter which he submitted some months back to be digested by the press and the voting public at-large has now been deemed the laughing stock of the medical community. Including the discovery that the doctor is no longer a member of the “F.A.C.G.” (Fellow of the American College of Gastroenterology) and hasn’t been for over two-decades, yet still places this distinction in his signature. Strange? However, what is even more amusing is the consensus by some on Twitter:

Now this correspondent has nothing personally against anyone’s opinion but as this thread of exchange illustrates is how an opinion can go from a somewhat civil discussion over The_Donald to that of a weak ad-hominem point when confronted with irrefutable and objective facts by delusional Trumpeteers™ & Trumpsters™.

However, what is more interesting that some quack-doctor, who also may be in violation of HIPAA regulations still using Microsoft’s discontinued & unsecure Windows XP operating system, is The_Donald going hot and heavy in trying to convince African-Americans that he is on their side. What is really disturbing about this is that his supportive history with African-Americans, or for that fact anyone other than White, has been somewhat non-existent or even the anti-thesis of what he’s now declaring. What is even more alarming is what he is saying, or even dog-whistling to the African-American community:

“You live in your poverty, your schools are no good, you have no jobs, 58 percent of your youth is unemployed …We will make your streets safe so when you walk down the street, you don’t get shot, which is happening now. That’s what’s happening now …You have a right to not get shot..“

What is really deranged about his (sic) appeal to African-Americans is his suggestion that only HE can keep this ethnic segment of the American population from being shot and killed; if not a dog-whistle of sort to those who might take action if he doesn’t get their vote? In this context the numbers do not statistically or in reality add up as well.

But then, nothing really adds up with The_Donald’s candidacy and of the lunacy coming out of his teleprompted orifices. Both of which appears to be heading (if not already there) into a ditch of defeat for which even a letter from a M.D., M.A., MFCC, MFT or even a Ph.D. in psychiatry will not be able to mitigate?