Dateline: Santa Clara, CA (10:45 am PST) — A number of Republican representatives in the House tried to nominate Donald Trump for the Nobel Peace Prize .. however it appears that the nominations for this year’s has expired .. 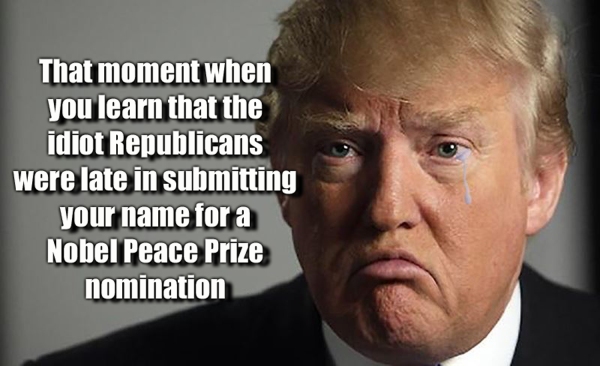 However the question begs that there appears to be no “peace” with this Trump regime against the U.S. Department of Justice, namely the F.B.I., #NeverTrump Republicans and a growing number of Americans who do not identify with the duplicitous lies, deceit and criminal intrigue posed by the DOJ special prosecution and investigation into the possible collusion, and at this time possible cover up and obstruction of justice.

In making the world a better place with the term ‘peace’ in mind, is it fitting for a candidate, or nominee be accepted when in the middle of ‘war‘ with his, or her own people & government?

Or is it just an ignoble fool’s errand to pursue?