She’s back; back on the campaign trail once again.  Why?  To unseat Republican House Speaker Paul Ryan for snubbing her boyfriend The_Donald, who neither endorsed his presumptive Republican presidential nomination, nor gave a coherent reason as to why not support to his candidacy and nomination.  The non-answer or lack of an emphatic response was a clear shot across the bow of The_Donald, and is now gaining a whole lot of traction in the media, Internets, and covens within The_Donald’s campaign apparatus.

Sarah Palin as almost everyone remembers from the 2008 General Election was the un-vetted Vice Presidential candidate and running mate of Sen. John McCain, and both of whom lost – terribly – to current President Barack Obama.  The memories of that campaign and election are painful for those who voted for that ticket to remember, but saw the rise of a new dynamic in the way of American politics and in the way of the Tea Party movement; that which drew in and created politicians and members like Ted Cruz, Rand Paul, Allen West, and of course the darling, and regal queen of ’em all, former Alaska governor, Sarah Palin.

Yes, she’s back to support a business man, Paul Nehlen whom Rep. Ryan will be running against in the August 9th Wisconsin primary, and who just may kick Ryan out of the Speakership and Congress and House of Representatives altogether. Palin to her credit appears to be picking the right fight to win, however the bigger battle is that which may involve The_Donald, and possibly Hillary Clinton.

But back to Sarah. The former Alaska pageant beauty queen was on CNN this morning with Jake Trapper, and among one of the matters discussed was the possibility of being tapped as The_Donald’s running mate. And when asked if she would, she replied, “I think I’m pretty much as vetted as anybody in the country could be vetted …I’ve been told to go to Hell so many times …” Okay, she ‘gets it.’ However, and although it looked as though she had just woke up her demeanor suggested, at least to this correspondent that it wasn’t out of the realm of ‘reality’ for her – with her ‘waiting by the phone?’ 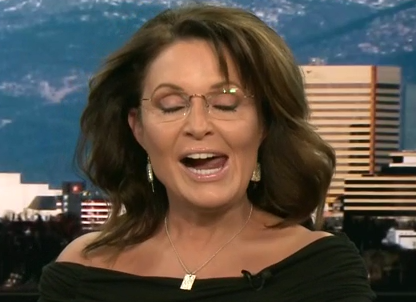 Yet, just WHO is to question whether she would want to or not, because it is for her to know and for the American voting public to find out.  However, and if she does run it would be either a political stunt, or ‘joke,’ or “The Real Deal” …or construed that The_Donald campaign has gone full-retard and off-the-rails.  But seriously, to have her as a running mate would address and counter the female opposition that is confronting The_Donald, and in the way of a potential Hillary Clinton Democrat nomination. 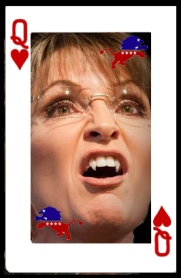 Additionally who is better qualified, and (sic) vetted for the job?  Sure she lost, and lost real bad, in 2008; sure she comes off like an air-headed ditz and a moron, but seriously, it is not her at the top of the ticket – The_Donald is. Sure she would be just a heartbeat away from the highest office in the land, but given The_Donald’s invincibility this should not be an issue with the most rabid of supporters or Americans at large, right?

Okay. It’s all but one big fat joke, but a consideration that isn’t so far-fetched with the provocative and insulting things The_Donald has said regarding women lately.  In fact, and in the context of the “woman card,” he just may have one up his sleeve? Ya’ll need to stay tuned.