The_Donald called her, “Pocahontas.” He denigrated and insulted Senator Elizabeth Warren (MA-D) like an overbearing school yard bully. He whipped up his supporters in rallies in continuing with this long into the end of the Primary and Caucus season. And he drove this matter over her presumed American Indian heritage with the relish of some adolescent Encyclopedia Brown with the discovery of catching her in a lie. A ‘white lie?’ Or simply a misconception that began when Sen. Warren was a child? 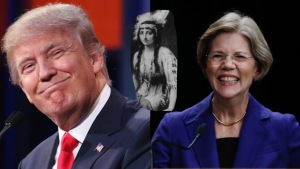 Yet, this is not about what Sen. Warren’s heritage is; nor is it questioning the integrity of this legislator over a mis-perception or misconception; spun into one, single lie. It is about how she tore into The_Donald like he never been torn into ever before over the course of these campaigns, and by a woman, a politician and a fighter who he appears to have had a “mis-perception” of.  In the context of the U.S. District Judge, Gonzalo Curiel and who is presiding over the now famous Trump University litigation & controversy, and from the lectern, she bellowed, “… No, Donald Trump what you are doing is a total disgrace …” at the American Constitution Society conference in Washington, DC today:

It appears there are not enough superlatives in the American-English lexicon to describe The_Donald, and of what he has said in his campaign speeches, and in public to the media, to raise concern over what sort of president he would make; if not the across-the-board animus generated among Americans. It also brings in to question his character as a person, and who it appears seems not to know what he is doing or saying over the challenges America faces, and to raise such ire.

Is it here (above when he clinched the for the Republican presidential nomination) where the voter can look into the heart and soul of The_Donald and aside from his prolific yet at most times inane Twitter tweets? Not, necessarily? For with just over 150 days to go and almost a 1/2 year till November until the General Election will he be fully-vetted for the job.  However the path to victory (or even defeat) may not go like the Republican primaries and caucuses. Not only is he up against a seasoned politician in the way of former Secretary of State, former Senator of New York and former First Lady in the way of the Democratic presidential nominee, Hillary Clinton, but he is up against endorsers like Sen. Elizabeth Warren who recently endorsed her on the cable news television network MSNBC w/Rachel Maddow earlier this evening.  Coupled with the previous endorsements by the President and Vice President, and even former Saturday Night Live celebrity, Sen. Al Franken (MN-D) later in the eve and of whom will presumably campaign for her The_Donald is headed into one heck’uva fight …or even W A R.

Given this most stinging if not fiery attack on The_Donald Sen. Warren appears now fit, willing and able to take the point in continuing this campaign against him; ready to go to rhetorical blows and into a Twitter/social media war the likes that the American voting public has never seen? For it will be in the coming days, weeks and months that The_Donald will come to know the true meaning of the idiom (in a campaign/political sense): “Hell hath no fury like a woman scorned.” And for him ‘there will be hell to pay?’

Update from the Front Line of the Battle: