The Russians Are Coming II 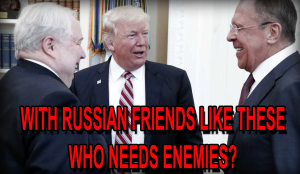 Dateline: Lancaster, CA (5:25 am PST) — As the Senate intelligence hearing begins the new and acting FBI director is about to speak before the committee. While in the wake of the Russian visit to the Whitehouse yesterday questions continue to be raised over the Trump-Russia controversy and now labeled “cover up.” Why The_Donald went forward in accepting to meet with the Russian diplomats and accepting the Russian government press TAAS (American free press was barred) after firing FBI director James Comey is unprecedented.

The optics in all this was by all accounts “bad” for The_Donald and of which stokes the fires of the controversy regarding his relationship, or even possible collusion by him with Russian intelligence during and after the election.

With disgraced former NSA director Michael Flynn being subpoenaed the afternoon before, more information regarding the Russians can be expected as calls for an independent investigation become more pervasive in the narratives against The_Donald and his administration.  Additionally accounts from Republican town hall meetings have many, not only raising opposition to the AHCA vote, but demand for a independent non-partisan inquest into the Trump-Russia “cover up” as well.

With a recent polling of The_Donald dropping to 36% it appears that this is a Presidency and administration ‘on fire.’ However, and presumably not in the context that he would want.