Dateline: Laguna Niguel, CA (3:46 pm PST) — This was an interesting if not an enlightening exchange with this particular Donald Trump #Trumpanzee. In starting a few days back he knee-jerked to this Tweet:

Then it went, as to be expected ‘downhill’ from there – with him taking a break during the interim, for a day or two, for whatever reason – probably to mull over my opinion?

.. can one prove that there are “no crimes?” .. any proof of “zero evidence?” .. #maga @realDonaldTrump is litigating this from the media TV .. #mueller is investigating by a DoJ order and whose batting avg. is getting better .. pic.twitter.com/0XoyJWrMxl

Synopsis: It was entertaining how the thread of exchanged Tweets progressed. Apparently the replies in-Tweet had him going off into a tangent from time to time and splitting the thread into three parts today. In further trying to understand whatever point he was trying to make it became obvious that he had lost all sense of rational and coherent thought; left to defend Trump by whatever semi-insane manner he could muster.

In obligation, despite the insults tendered by him, try as I did kept it as civil as possible. However, what came out of all this was a better understanding of the average Trumpanzee and that they are certainly dedicated to Trump no matter how insane, obnoxious and down-right stupid #covFeFe truly is. The literal blind faith in covFeFe alone was enough to bring a laugh and somewhat take for granted of what a wonderful medium Twitter can be. Where the exchange of opinions, whether right or wrong come out as ludicrous as it can ever be .. even to the point of him ♥ re-tweeting & liking his own Tweet.

Like watching a petri dish and seeing an amoeba or some sort of cranial organic entity form was amusing, but what was more interesting was to seeing as to what depths/lengths this malady of ‘Trump-ism’ goes. It’s deep and ingrained somehow with even the semi-coherent and of which doesn’t come without too much surprise. Yet, it is this block of blockheads that are not to be feared, or even ridiculed but to be marveled over in terms of its simplicity and sheer idiocy – though now blocked am unable to illustrate the hilarious and inane nature of the recipient of my opinions – but if there is a consolation, it’s knowing that my point was ill-taken ..

Today has been a good day.

Update:
In picking up Android I have at least have this (the irony is that he started the thread in trollin’ me) LOL ! : 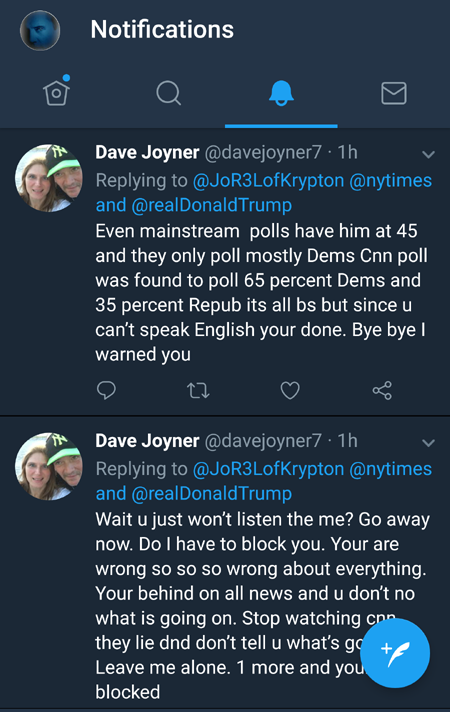 I guess I made my ‘point’ (among others)?

.. there is a poll that Rassmussen is one of the least reputable of all the political polling organizations .. in fact, it was featured in a number of op-eds and academic research to be of a model that contradicts 'reality' .. pic.twitter.com/nZN2vTsF4O