@Home 1:30pm (PDT) – MSNBC is now reporting that the creator of the Fox News network has ‘resigned.’ As AM radio conservative talk demagoguery personality, Rush Limbaugh was Roger Ailes premier protégé in the 90’s, along with a cable televised show. Has “Fair & Balanced” been now righteously kicked to the curb of the American political lexicon? 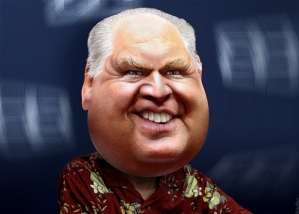 For years the personal, business and political relationship between Limbaugh and Ailes has been solid (if not in mass) as the Rock of Gibraltar. And for a long time they were not only the foundation of the conservative/Republican voice in network broadcast and media but were instrumental, along with then Gov. Jeb Bush in Florida, in getting former President George W. Bush into the Whitehouse. It only comes with amusing wonder how Limbaugh, who for the most part has surprisingly kept his trap shut over the Ailes’ troubles will react.

What has potentially led to this:

[On July 6, 2016, Gretchen Carlson filed a sexual harassment lawsuit against Ailes, including allegations that she was fired for rebuffing Ailes’ sexual advances. Ailes denied the charges and called Carlson’s lawsuit defamatory, offensive, and retaliatory for the network’s decision not to renew her contract. The day Carlson’s lawsuit was filed, The Huffington Post reported sexual harassment allegations from two anonymous Fox News employees.

Three days later, New York magazine published accounts, reported by Gabriel Sherman, from six women (two publicly and four anonymously) who alleged sexual harassment by Ailes. In response, Ailes’ counsel released a statement: “It has become obvious that Ms. Carlson and her lawyer are desperately attempting to litigate this in the press because they have no legal case to argue.

The latest allegations, all 30 to 50 years old, are false.” On July 19, 2016, New York reported Megyn Kelly told investigators Ailes made “unwanted sexual advances toward her” at the start of her career about 10 years ago. Breitbart News reported that the hosts of Fox News’ entire prime time line up and at least 50 Fox News contributors are willing to leave the network if Ailes is pushed out by Rupert Murdoch and his family.] — Source: Wikipedia

7/25/2016 – Came across this video which I feel pretty much encapsulates just what happens when a geriatric, bald, sexually depraved media mogul finds the true meaning of “karma.” Sam Bee certainly puts the resignation (if not firing) of Roger Ailes into a concise if not clear perspective in this hilarious but sad account of this utter P.O.S. of whom epitomizes the depravity which appears to be at the core of Rupert Murdoch’s Fox News network. However, as TWT presumes, it only scratches the surface of what may lays beneath this soft white underbelly of the deranged. As time goes on, and as more come forward this major (turned comedic) arm of the VRMC should unravel in the most amusing if not entertaining manner possible?