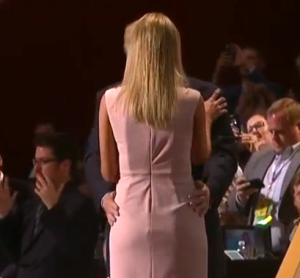 Watching now via C-SPAN and with just over an hour to go till The_Donald’s acceptance speech there is dancing in the aisles of the convention, with spirits among the delegates appearing quite high and optimistic. With the build-up by the campaign, as well as the media and press, and up to this moment in time & history was nothing short of apprehensive excitement.

After being introduced by actor Jon Voight and his daughter Ivanka The_Donald approached the podium applauding himself. He then launched into a nostril snorting and canned diatribe over the problems that faced the country. He continued in scripted teleprompted political rhetoric over anything, and everything wrong with his opponent former-Secretary of State Hillary Clinton, and everything right and politically correct with himself and his candidacy. In continuing to rattle off a litany of everything wrong a woman caught the attention of the cameras in protest as the networks caught brief footage thereof. 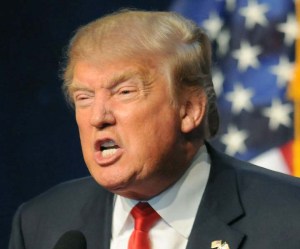 In returning to attacking Clinton The_Donald went headlong into more rhetoric over the private server investigation, the Clinton Foundation and extrapolating how much he knows everything about “the system,” and that which he can “fix.” Continuing in salivating blather over ‘this being rigged’ and ‘that being rigged.’ And in citation of the violence and attacks upon law enforcement he suggested that the responsibility in combating the problem may lay upon his vice presidential selection, Mike Pence; repeating for the nth time that he is the “Law & Order” candidate – And will completely, totally and finally put an end to all crimes?

With more labored nostril snorts he continued with his demagogic performance citing one subjective failure after another without offering at least a very brief abstract of whatever policy or plan to implement. And in innuendo citing the terror abroad and placing the blame of all of it on the current presidential administration; with even more fear mongering in and of a policy that: “We are going to win, we are going to win fast.”

In terms of foreign policy The_Donald suggested that the United States, along with its NATO allies who are not doing anything monetarily, are allowing chaos and destruction throughout. And that the immigration policies of the current administration are failures, yet proposing a policy of simply “loving people.” Touching upon Blacks and Hispanics he offers vague solutions in naming names of presumably those who have been stricken by crime; again and audaciously suggesting that nothing was being done to ‘shelter them,’ and that he will fix it because “they are no longer alone.” He then vociferously spouted his early campaign promise of ‘building the wall,’ and lauding his plan, and whatever it is in ‘stopping illegal border crossings,’ as well as getting those who are already and illegally in the country.

In the third person The_Donald declared that in January of next year that, “the laws of the United States are going to be enforced …We are going to be compassionate.” As he segued into a rhetorical spiel on trade he promises to make the U.S. ‘rich again.’ In slamming NAFTA and the Clintons, he then says ‘that he has a plan to bring jobs back to the country.’ And on TPP he then pledged that, ‘we will never ever sign bad trade deals.’ “We will negotiate.” “We will make the best deals.” On taxes, he promises that the tax laws will be ‘simplified,’ “for everyone, I mean everyone.” Repeating, “we are going to do it, we are going to do it fast.” 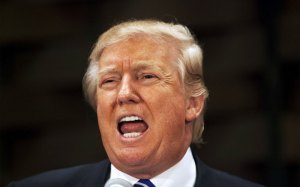 In yelling (as he had been doing throughout the speech) he proclaimed that, “trillions and trillions of dollars will flow into the country …Millions of more jobs!” And promising to helping families send their children to schools ‘of their choice,’ “repeal Obama Care,” and “fix the TSA,” help veterans; fix everything wrong with the country, protect the 2nd Amendment with help of the NRA, and in a wild tangent promising everything, and just about anything under the sun.

With sweat forming on his upper and lower lip and “ out of wherever,” he touched upon religion by citing President Lyndon Johnson, in the context of tax exempt status and meandered into “free speech.” Additionally promising that America will “bigger, better and stronger that ever before!” In concluding his over an hour-long speech he then heaped praise upon his family. He then declared that, he is “going to go to work for the country,” like he has never ever done before. And that “I’m with you, the American people,” and “I will win for you,” in a promise and ‘pledge.’

To the ear of those who are not in tune with American politics, it presumably came across that America was equivalent to living in Iraq, or even Syria, but there is hope in a vote for him will fix everything. In all the speech came across as angry and carried by his yelling throughout. It appeared meant in a wide brush to paint in the darkest description the state of America, and that he and only he has the solution to make it all go away – Even promising to support and accept the LGBTQ (with emphasis on the “Q”), Jews, Blacks and immigrants. However it begs to question: Is he lying again?

He then ended this epic barn burnin’ exhibition in the loudest exercise in nativist, populous neo-demagoguery by promising that he will “Make America – [fill in adjective] – Again” … as the band Free’s ♫ Alright Now ♫ boomed throughout the hall. And with the cheers, confetti and balloon drop everything appeared to be ‘alright,’ for now.

@ July 22, 2016 12:10am – While zipping through the Twitter-sphere I caught this one from Dave Itzkoff and it was a pleasant surprise to see that Moses came down from Sinai to express his anger? And no, not so much a swipe at Jon but his morning shadow caused the imagery of the biblical celebrity to leap to mind – and man was he pissed.