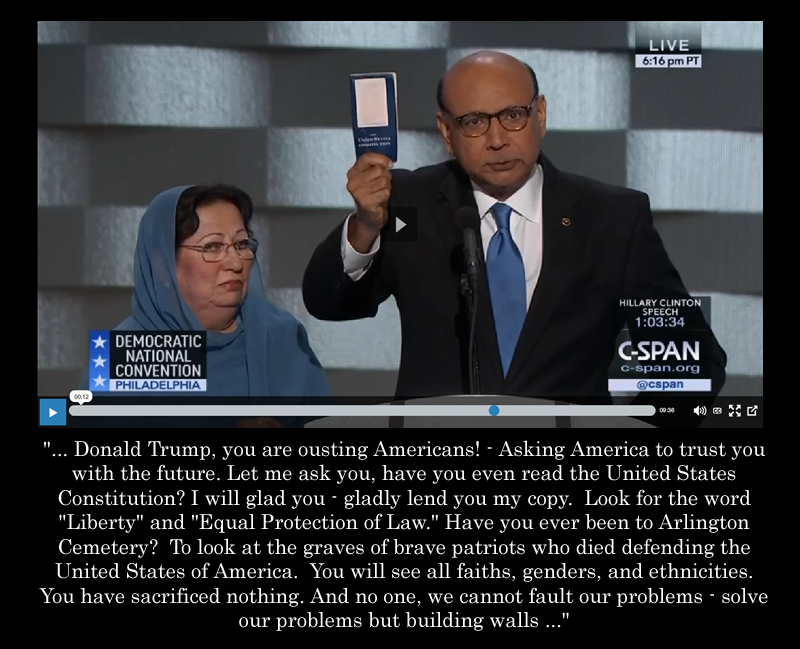 @Home 7:30m (PDT)
Just finished watching Lawrence O’Donnell’s interview with the late United States Army, Capt. Humayun Khan’s parents on MSNBC’s broadcast program, The Last Word; of their appearance and speech at the Democratic Party Convention the evening before.  Words alone cannot express how moving this interview was. From the appeal to Republican leaders McConnell and Ryan to how their son lived his life and of his plans after his military service, what was striking was the candid and forthcoming manner, as painful as it appeared that it was, was conveyed.

Lawrence then asked of the sacrifice that The_Donald has presumably made via his children. After briefly conferring with his wife Mr. Khan then replied, “…To sacrifice you don’t have to wear the uniform, to sacrifice. We all as patriots can sacrifice …and sacrifice includes not threatening others. Not making others feel less …We do not see any glimpse of sacrifice in him [The_Donald]…He is not suitable. He is not fit …”

To underscore the ugliness of what Mr. Khan spoke of, this completely unhinged & deranged tweet, from a so-called ‘conservative,’ and Fox News network contributor, was what he presumably had in mind of those ‘sowing’ divisiveness:

You know what this convention really needed? An angry Muslim with a thick accent like Fareed Zacaria.

To this point the words: “You have sacrificed nothing,” shall go down as one of the most memorable in the annals of American political campaign history.

Today on the ABC network program “This Week,” The_Donald responded to the late U.S. Army Captain, Humayun Khan’s father’s interview the night before claiming that he had “sacrificed nothing.” For his knee-jerk, The_Donald began, in racist innuendo that Mrs. Khan, in not speaking at the convention, was because they were “radical?” In the fact that they are simply Muslims? Perhaps he did not see the speech at the DNC convention, or last night’s interview where the Khans elucidated and conveyed their allegiance to & of their American citizenship ?

He then unwittingly, if not witlessly qualified his own opinion of Mr. Khan’s convention speech by stating that he based, and took it upon what “others” have said, or even tweeted. For a peeled cantaloupe with a “good brain” he wasn’t at all articulate. He then went on to some jibber-jabber over how he, in ‘creating jobs,’ was a sacrifice, completely throwing rationality and common human decency out the door. To date this has got to be the one of the most repugnant, un-hinged, bat-sh%t ‘glimpses’ of The_Donald never before seen. And there will be more, and perhaps where the debates are concerned?